After a few bumps in the road in road in December, things are back on track with Casting the First Stone, which releases in 23 days!! I'm celebrating with a Facebook Book Launch party featuring games, prizes and chatting from 4-8 pm EST on January 27. Follow the link above to RSVP yes to all the fun! Who knows? You might win a prize! Gift cards, Thirty-One Gifts products and a signed copy of Liz Curtis Higgs' Bad Girls of the Bible all going to be given away!

For those of you who prefer real world events, I'm also doing a book signing at the Randolph Park Starbucks in York, PA from 4-7 on Sunday, February 9. In addition, I'm in the process of setting up a signing at the Village Library in Jacobus, PA and launch parties in PA and NJ. Check out future Saturday Specials here for more details, or like my Facebook author page and see it all there. As promised earlier, I'm trying to stick to Saturdays when it comes to promotional posts on this blog while maintaining my usual content the rest of the week.


Casting the First Stone explores a custody dispute from the perspectives of two very different women: Marita Mercer, Charli's mother and Angel Alessio, Charli's stepmother. Last week, I introduced you to Marita and her family. This week, I'd like to introduce you to Jim (Charli's father) and his family. 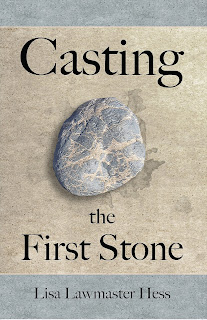 Jim Alessio: No longer a nineteen-year-old frat boy, Charli's father is a successful businessman. Married and ready to be a father, Jim claims he is seeking full custody of Charli because he feels he and his wife will be better role models for his pre-teen daughter.


Charlotte Mercer Alessio ("Charli"): Twelve-year-old daughter of Marita Mercer and former frat boy Jim Alessio. Though she began life as the result of an unplanned pregnancy, Charli has had a good upbringing thanks to her mother and her grandparents. Charli is bright, well-adjusted and happy with her life the way it is.

Angel Spencer Alessio: Jim's wife. Eight years Jim's junior, Angel is delighted to play the role of his wife, and is ready to conceive a child of her own. Angel loves Charli, and although she'd love to spend more time with her stepdaughter, she is unconvinced that taking Charli away from her mother is in anyone's best interests. She, along with Marita, tells the story that is Casting the First Stone.

Carmella Alessio: Jim's mother. She maintains that there's no proof that Charli is Jim's daughter, and makes it clear in no uncertain terms that she thinks her son's pursuit of custody is a bad idea. She has never had anything to do with her granddaughter and doesn't plan to start now.

James Alessio Sr.: Jim's father. Owner of Alessio's Pizza, he taught Jim valuable lessons about business, but stands with Jim's mother when it comes to Charli. Like Carmella, he convinced Jim to walk away when Marita told Jim she was pregnant.

Stay tuned for more characters...and updates on book-related events :-)
Posted by Lisa Lawmaster Hess at 12:00 AM