Let Me Tell You a Story, Part 7 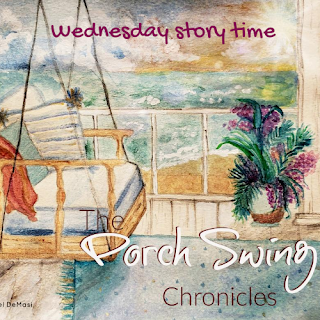 Jumping right back in :-)

Nurse Ramona pulled her gaze from Charli and Adam. "My shift is over in fifteen minutes," she said. "But you just ring for one of the other nurses when Master Adam is ready to go back to the nursery. But be sure and feed him first. That's probably why he's fussy." Nurse Ramona nodded to Marita and patted Charli's shoulder. "Nice seeing both of you again. It sure is nice when folks can work together."

"Nice to see you, too," Marita said to Ramona's retreating back.

"Oh, hello, Mr. Alessio!" Ramona's voice drifted into the room from the hallway. "And who might you have with you today?"

Marita froze. She had intentionally called Angel before they'd left for the hospital to make sure she and Charli would arrive when Jim wasn't there. True, Marita and Jim had reached a détente early in Angel's pregnancy, but thirteen years of hostility didn't dissipate simply because they'd agreed to do what was best for Charli.

Glancing at the drab, olive chair in the corner of the hospital room, Marita briefly considered returning to her safety zone. But why should she? She was Charli's mother, and Charli had every right to be here.

Still, a bit of distance sounded good. Escape sounded even better. She grabbed a water pitcher off the table beside Angel.

"Marita?" Jim's voice was strained, as though he'd just finished a coughing spell and had barely caught his breath. "This is a surprise."

"I was just going to get some water for Angel," Marita said.

"Hi, Dad," Charli whispered, snuggling Adam close to her, her eyes leaving the baby's face only long enough to glance up at her father.

"Well, look at you." Jim leaned down and kissed Charli on the top of the head, then kissed Adam's forehead. "He's not too heavy for you, is he?"

An older couple had followed Jim into the room. Except for the gray sprinkled through his sandy crew cut, the man's coloring was identical to Jim's. Marita had never met Jim's parents, but she was certain the man was Jim's father.

The woman just looked mean. Frigid blue eyes were narrowed into a gaze that looked as though it had the power to mow down everyone in its path. She was a substantial woman, too, with the sort of build and style that made her the poster child for the phrase battle-ax. Except that she wasn't a child and no poster would want her.

"Why is that child holding my grandson?"