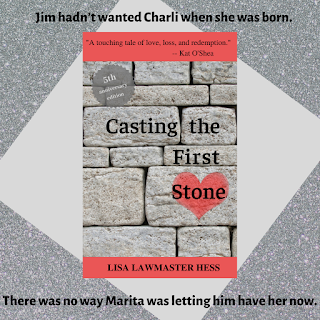 At the beginning of this month, I finally re-released my first novel, Casting the First Stone, as a Kindle book. I'm working on making a paperback edition available as well, but my main goal was just to get the book out there and available again, this time as an indie book. While I'll always be grateful to Lighthouse Publishing of the Carolinas for getting the book out there in the first place, I'm delighted to have my book back in my hands. The re-release brought a new cover and a few tweaks between them but otherwise, this fifth anniversary edition is just like the original.

I never thought I'd write a novel. When I first started writing, I wrote articles, almost exclusively. Their length and content felt approachable -- still does -- and provided a great starting point. Gradually, I moved in the direction of books for counselors and educators, an area that was, for obvious reasons, within my comfort zone. My first book, Acting Assertively, arose out of lessons I was teaching to my fourth and fifth grade students.

Then, as I was taking my second course with the Institute of Children's Literature, I decided to try my hand at short fiction, in the form of vignettes. I wrote what I knew -- stories about kids in families -- and, along the way, decided to keep writing these stories with an eye toward creating a collection of stories that could be used as bibliotherapy with children of divorce.

But two of these stories never made it into the book. My editor and I agreed to disagree about language (dialect) and content and the book moved forward without those two stories.

One of them became my first novel, a middle grade book that's still in a box somewhere in my office, having never found a publisher. I still hope to get back to it some day but, along the way, I wondered what would happen if the mother in the story had a story of her own.

And Marita Mercer, one of the protagonists in Casting the First Stone was born.

While a little piece of that other character resides somewhere inside Marita, Marita has diverged from her origin and, over the course of three novels, become her own person, so to speak. I often forget that she was inspired by someone else entirely -- another character in another story with an entirely different life.

My next project is the final novel starring Marita and friends -- Courting the Final Verdict -- which brings to a close the story begun in Casting the First Stone and continued in Chasing a Second Chance. The book is finished and needs only a final polish, which means I hope to have it out by the end of the summer.

It's been quite an interesting journey over the past 26 years or so and I can't wait to see who I meet as I continue moving forward. I have a few characters with completed stories waiting in the wings, and a few who are just learning their lines.

I hope you'll join me for their debuts.