It's not even Thanksgiving, yet the halls (or some of them, anyway) are already decked in our house. Don't blame me. If it were up to me, the decorations would still be in the crawlspace.

My husband has always been an early adopter when it comes to Christmas decorations. When he wanted to put up the outdoor lights last weekend, I thought it was a bit early but, as he pointed out, Thanksgiving is late this year and it makes sense to put them up before it gets too cold.
Okay. I'm not the one who puts them up and, if he's outside happily working I can be inside happily writing, so it's a win-win. The outdoor lights are pretty and understated (as my mom would say), so having them up now is kind of nice.

But then, Monday night, he took out the Christmas Village houses -- the ones that are laid out under the windows in the dining room and in the bay window of the mudroom.

Suddenly, I felt as though we needed a little less Christmas. I'm no Scrooge, but I'm not ready for a full-on assault of Christmas decorations before the Thanksgiving turkey has found its way into the oven. 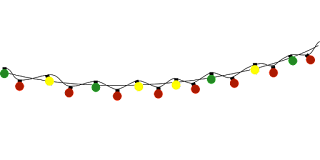 So, last night, when he came back into the family room with a string of blue lights in his hand, I said, "You're not putting those back here."

"Why not?" (feigned ignorance)

I had no valid verbal reply, but apparently my face spoke plenty loudly because he took the blue lights (yuck, by the way) into the mudroom and added to the light show there. Even I had to admit they looked nice out there, where there were already decorations.

I feel obligated to say (once again) that I'm not a Scrooge (Ebenezer, McDuck or otherwise). The trouble is that he's an early adopter whereas I like to keep the decorations up until mid-January. I have a dearth of Christmas spirit in mid-November but, in mid-January, when the days grow colder and grayer, I love the warm glow of the lights that keep Christmas around just a little bit longer.

This weekend, after the turkey has been digested (and perhaps the leftovers as well), I'll be ready to reach into the crawlspace and pull out some of the decorations. But, until then, I'd like to slow things down and savor some stuffing before it's time to stuff the stockings.

So, if you've got early-adopter Christmas spirit to spare, please keep it to yourself. I'm hitting the snooze button on Christmas until I celebrate Thanksgiving.

But you can bet you'll find my Christmas cheer up after New Year's.