Not the Minutiae of the Mundane


Last Friday, I wrote about optimism and gratitude, themes that continue to echo through my mind today. I wasn't planning to come back to this topic but, as I mulled over today's post, that's exactly where I landed.

A couple of hours ago, I was optimistic that I'd get this post written and uploaded by noon. (Spoiler alert: I didn't. Unless you're on Pacific Time and then I might just make that arbitrary deadline). Although it's been the mundane that has kept me distracted from this post -- laundry, emails, social media reading and posting -- what I've found in my online travels so far today has been far from mundane.

I discovered that my book is now available at The Catholic Company. I found out that when I click on "Best Sellers" in the OSV Bookstore, my book is at the top of the page. My Facebook feeds include photos posted from friends who attended yesterday's wine and cheese reception celebrating the release of Know Thyself and well wishes from friends who couldn't make it.

I kept chiding myself, as I usually do when I'm procrastinating, and it took me the better part of the last few hours to realize that what I was doing was exactly what I should be doing. 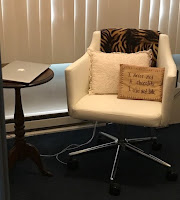 In the past two months, I've done three podcasts, two radio interviews and been the subject of a magazine interview. I've had two book parties, with three more signings to come. Amid these celebrations, I've also taught a class, finished the first draft of a novel and done innumerable day-to-day things like laundry, dishes and making meals; I've planned book events, written blog posts, gone out with friends and watched Netflix with my daughter. Oh, and I got a new desk chair.

The trouble is, some truly exciting things were getting lost in the minutiae of the mundane. I would make a discovery, complete a podcast, host a celebration and then...

Go back to the real world.

This is, to a certain extent, how it's supposed to be. Humility is a trait worth cultivating, not only in terms of personal character but in terms of human relations as well. No one wants to be around someone who knows only one note, especially when that note is meeeee!!!

But lack of gratitude isn't humility. To allow amazing, incredible things that we've worked for to get buried in laundry and dishes is to fail to appreciate them.

As I was planning my schedule one night last week, feeling a little overwhelmed and overcommitted, I had to give myself a little talking to about gratitude and savoring. These things that were happening -- these exciting new developments -- deserved more than a line item on a to-do list.

They deserved to be savored. And I wasn't doing that. Instead, I was racing from one thing to the next, checking things off my list.

And that's not gratitude.

Not at all. And the day I start taking it for granted is the day it's time to hand the baton to a hungry writer who is sweating over every word, hoping to have what I have right now.

Last night, I did a radio interview with Fr. Ron Lengwin who's been doing the same show for somewhere around four decades. He'd read my book thoroughly, and prepared for the interview to the point where I almost felt as though he knew my book better than I did. He opened the show by reading my words aloud to the audience -- something he did several times throughout the show.

There was no way not to savor that; it was at once humbling and exhilarating. I was grateful not only for the fact that he chose to share my words but also that I had a moment to catch my breath before I had to respond to his first question.

I have been writing for more than 25 years, producing five books, contributing to two others and writing more articles than I've kept track of. Know Thyself was twelve years in the making.

This is what I've been working for. It's time to stop and smell the roses, and savor the fact that they're my roses because, after all, roses bloom for only a very short time.

What do you need to savor? What is happening in your life right now that deserves your full attention and gratitude?

Take a moment. Take it in. To savor is to be grateful.